Engineer’s Log, Labdate 0730.12. We finally reached Warp 5.0! Too bad this starship has been shut down long since.

Yesterday I met target #6 of my Retrochallenge project: A very basic Graphical Processing Unit has been implemented. Besides its primary tasks (framebuffer handling, host communication, set pixel at x/y position) the microcontroller features a DrawLine command now. This results in a tremendous speedup: 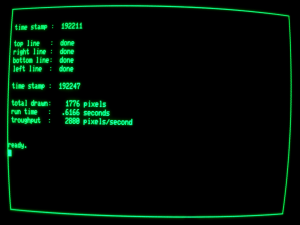 We went from 159 seconds (see previous post) to 0.62 seconds! Instead of sending 1776 single SetPixel commands to the HRE we’re now sending only 4 DrawLine commands. This way we overcome the poor BASIC performance.

The acceleration would be even more impressive if we would compare diagonal lines because in that case we’d have to do some additional calculation in BASIC. I implemented a complete Bresenham line drawing algorithm in the HRE firmware so diagonal lines are supported.

The microcontroller has still plenty of flash memory left for future expansion (about 79%). But I have attained all goals for this Retrochallenge and prefer to spend more time in bed in the upcoming nights. 😉

I’m going to write a demo and to shoot a video in the remaining hours until RC2015/07 ends – provided that Murphy won’t bug me.